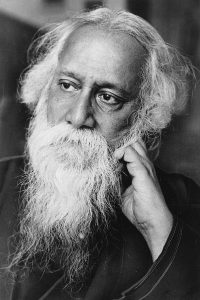 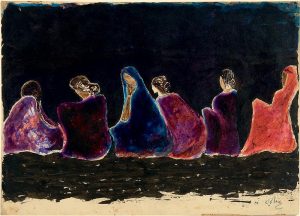 Sat. 7th October 10am-12noon – Bashabi Fraser and Debjani Chatterjee will lead a very special poetry workshop inspired by the poems and art of one of the world’s greatest creative geniuses Rabindranath Tagore. They will introduce the Tagore-inspired international e-journal Gitanjali and Beyond, to which participants may contribute. No prior experience required.
Booking: offtheshelf@sheffield.ac.uk  Booking fee: 50p per ticket. Tickets £1 more on the door. Tickets (In Advance) £5/£4 (concs)

Bashabi Fraser and Debjani Chatterjee are well-published international poets, editors, children’s writers and translators. Bashabi is a Professor of English and Creative Writing, and Director of the Scottish Centre of Tagore Studies at Edinburgh Napier University, and an Honorary Fellow at the University of Edinburgh.   An ICCR International Research Fellow, writing on Tagore, she is also Editor-in-Chief of the acclaimed Gitanjali and Beyond, whose first issue ‘Tagore and Spirituality’ was published in 2016. Recent books include The Homing Bird and Letters to my Mother and Other Mothers. Her awards include Saltire Society’s Outstanding Woman of Scotland award.
Debjani Chatterjee has been called ‘Britain’s best-known Asian poet’ (E Marino). Her 60+ books include Do You Hear the Storm Sing? and Namaskar: New and Selected Books. She is a Royal Literary Fund Associate Fellow, patron of Survivors’ Poetry and founder of The Healing Word. She received an MBE for services to Literature and Sheffield Hallam University’s honorary doctorate. She was an Olympic Torchbearer in 2012.
Debjani Chatterjee & Bashabi Fraser 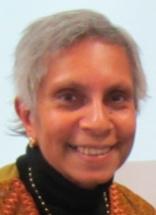 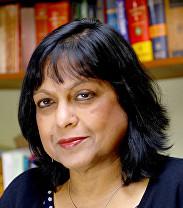