From the Hindu Mandir

Chaitra Shukla Pratipada is first day of the Chaitra month to mark the beginning of New year according to the lunisolar Hindu calendar. According to Brahma Purana, this is the day on which Brahma created the world after the deluge and time began to tick from this day forth. This day is celebrated as New year in many parts of country. This festival is called Gudi Padwa in Maharashtra, Samvatsar Padvo amongst konkanis in Goa and Kerala, Ugadi in Andra and Telangana, Yugadi in Karnataka, Nevrah amongst Kashmiri Pandits and Cheti Chand among Sindhi people. It is also celebrated in the North-East state of Manipur where it is known by the name Sajibu Nongma Panba Cheiraoba.

We are celebrating Gudi Padwa /Yugadi / Ugadi festival at our temple on Saturday 1st April 2017. For festival details please see the poster. 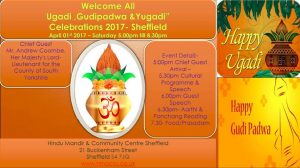